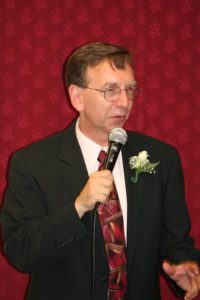 James S. Morrison was the pastor of GGCF in Marlboro from 1987-2016 and is now Pastor Emeritus.
Raised in a Christian home in Maine, he attended the local Baptist church where he accepted Jesus as his Savior at the age of nine. He attended Intervarsity’s Urbana Student Missions Conference at the end of 1973. There he received his call to pastoral ministry and foreign missions during the keynote message by Paul Little.
In 1976 he graduated from Northeast School of the Bible in Maine. He received ordination as a Minister of the Gospel upon graduation.
From 1979 to 1984 Pastor Morrison and his wife, Dawn, were missionaries in Helsinki, Finland. There Pastor Morrison helped establish The Scandinavian School of the Bible. He also led a thriving church (Raamattu Puhuu) in the capital city of Helsinki from 1981 to 1984.
Pastor Morrison is a cherished pastor and friend to many in Marlboro and around the world.
Sermons by Pastor James Morrison

We are here for you. Our prayer is that you would be blessed and strengthened by the power of Jesus Christ and enjoy a life of abundance in fellowship and peace with God.